As many people know, Dresden’s historic center was pretty much flattened during Allied bombing raids in 1945 during WWII (along with about 25,000 civilians).

Many of the iconic buildings of Dresden have bee painstakingly rebuilt, and look as if they’ve been standing for centuries.

The Frauenkirche is Neumarkt Square in the Old City. It was built in the 18th century, and completely destroyed during the war, with only two partial walls remaining.  The ruins were left as a memorial for many years, but it was rebuilt after the reunification of Germany, between 1994 and 2005. Much of the church was rebuilt with the original stones, which were documented as they were removed from the rubble, and their original position located with the help of computer imaging.

Our hotel was located in the same square – a perfect location. We were just a few minutes’ walk from all of the major historical buildings.

One of the most famous areas is Theaterplatz (Theater Square), where most of Dresden’s famous historical buildings reside, such as the Semperoper (the opera house of the Saxon State Opera). It was originally built in 1841, then rebuilt a couple of decades later after a fire, then restored again in 1985 after its destruction in 1945. It is regarded as one of Germany’s finest examples of neo-Renaissance architecture.

This area is also the location of the Church of the Royal Court of Saxony, and the Dresden Palace – which contains the Green Vault museums. The Historic and New Green Vaults contain the largest collection of treasures in Europe. Unfortunately, the museums were closed the day we were there. That was a shame, because it’s definitely considered a must-see if you are in Dresden.

Also at Theaterplatz is the Zwinger, my favorite of the places we visited in Dresden. It was built in the early 1700s as a venue for Dresden court festivities. In 1855, a Neorenaissance building was added, designed by Gottfried Semper. (You can see a rare color photo of the grounds dating to about 1895 here.)

Wall Pavillion at the Zwinger

I loved the satyrs on the buildings. 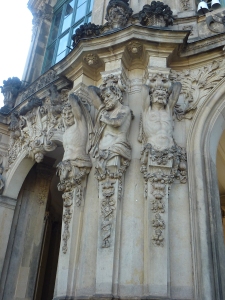 Of course, much of the complex was destroyed in the war and rebuilt. Today the Zwinger Palace complex contains three wonderful museums:

But one of the most delightful parts of the Zwinger was the Nymphenbad (Bath of Nymphs), a Baroque courtyard fountain surrounded on two levels by many statues of nymphs and mythological gods.

The fountain at the rear of the courtyard had all sorts of fantastical figures: 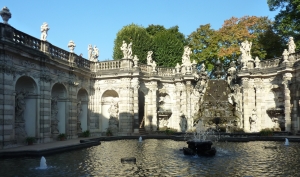 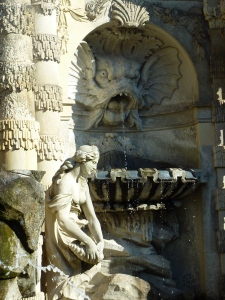 I’d have loved to just take a picnic lunch and hang out at the garden, admiring the statues.

Another sight in Dresden I really liked was the Furstenzug – the “Procession of Princes”. It was originally a fresco, but was replaced with porcelain tiles in the early 1900’s, and depicts the rulers of Saxony. It’s the largest porcelain artwork in the world:

If you’ve had enough of old architecture, there’s always the glass dome atop the Dresden Academy of Fine Arts, which is known as the “lemon squeezer”, for obvious reasons:

Or the ultra-contemporary New Synagogue, (2001), built on the site of the Semper Synagogue.  The old synagogue was destroyed during Kristallnacht – during which thousands of synagogues and Jewish stores and buildings were destroyed in Germany and Austria. 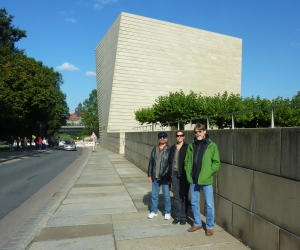 While of course there was good food and drink to be found, the most interesting thing we had was the Kofola, the communist cola. I didn’t much care for it, but I’m not a cola drinker anyway:

All posts for this vacation can be found with this tag: Europe2013

This entry was posted in Uncategorized and tagged Europe, Europe2013, Germany, Travel. Bookmark the permalink.