Recently I purchased two skeins of Drops “Big Delight” yarn (yes, I hear some of you snickering) – one in a blue mix, and one in a raspberry mix. I didn’t really know what I was going to do with them, but I was placing an order with NordicMart when all of their wool yarns were on sale, and I thought it would be fun to try. Since it’s aran-weight with long color changes, I thought it might make an interesting substitute for Noro.

Then about a week ago, I saw that the new Drops pattern collection had gone online, and saw this slipper pattern, which said it took 100 grams (1 ball). I had my doubts that I could really make such large slippers out of 219 yards of yarn, but I went ahead and tried it anyway. Hey, it’s just knitting, right? And I was fascinated by the slipper construction.

Well, of course, this is what happened. After 1 1/2 slippers, I and ran out of yarn. 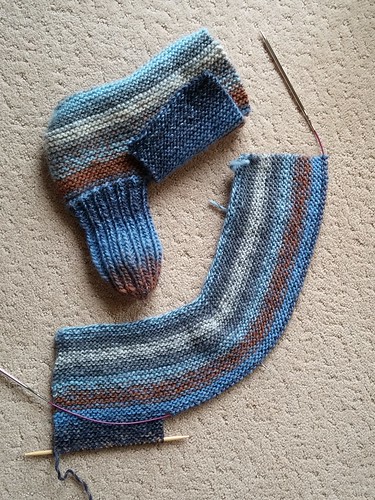 So now I need to decide what to do.  I could try using some of the yarn from the other skein I have. I don’t think the raspberry color would work all that well with the blue, but if I cut that out, the beige and browns would probably work.

Or I could just rip out what I have and make something else. There’s certainly enough to make smaller slippers that don’t go over the ankle.

While I mull it over, here’s what the finished one looks like when worn (minus the buttons, of course): 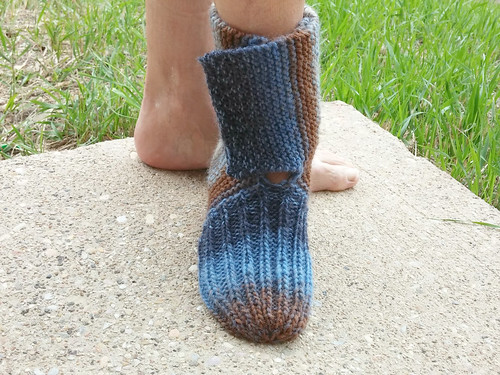 Currently I’m thinking about reknitting them with a similar heel/foot construction, but only ankle high.

Edited to add: Since all of the first comments on this post suggest buying another skein, I guess I should explain why I’m not interested in doing that – I bought the initial skein of yarn when it was 35% off and I was placing an order anyway, so there was no additional shipping cost. To buy another skein now, I’d not only pay full price for the yarn, but the flat-rate shipping cost would be 2/3rds of the cost of the yarn on top of that. Since I was only making the slippers to find a use for the yarn I already had, that seems pretty silly – especially when I wouldn’t have made them in the first place if I’d expected them to cost that much. (If I were going to order from the company again soon, I’d just wait and buy a skein then – but I don’t have any plans for that.)

This entry was posted in Uncategorized and tagged knitting, slippers. Bookmark the permalink.