I had serious doubts as to whether I’d get a wearable item out of this project, but I think it worked out in the end. I was using a much different yarn than called for (a worsted-weight bouclé in cotton and linen, instead of sport-weight Euroflax linen). But the yarn was free (thanks Deb), so it was worth a shot. 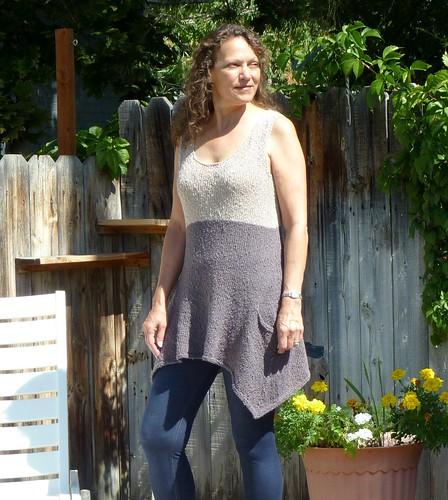 I ended up knitting the top piece twice, and there are still some changes I’d make if I knit it again. But overall, I think it came out pretty well, and is wearable.

The major changes I made were to lengthen the distance from hem to armhole, shorten the armholes, and widen the shoulder straps.

Details on my Ravelry project.

This entry was posted in Uncategorized and tagged FO, knitting, top, tunic. Bookmark the permalink.