At Least the Tea is Warm

I’ve been very bad about blog updates lately, but things have been crazy busy around here. My two main knitting projects are moving slowly, but I did sneak in a small one. 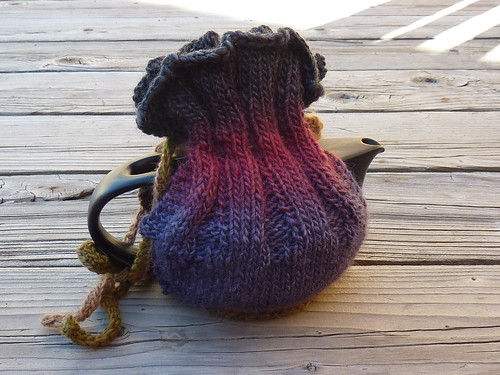 Most tea cozies just sit over the top of the teapot, but I wanted one that had fabric on the bottom as well.

My kitchen countertop is made of Silestone (man-made “granite” made from quartz), and has great thermal conductivity – heat readily transfers to and from it – so frozen things defrost more quickly, and hot things cool faster than when set on other materials. I don’t know if it would actually have much effect on the heat of the teapot, but I usually put the pot on a trivet or cutting board just in case.

Also, I often take the teapot to the living room or office, but then need to have something to set the pot on to protect the tables. Since this cozy basically has a built-in coaster, I can set it anywhere.

The pattern calls for a double layer on the bottom, with the option of making a little pocket for a sachet. I didn’t make the pocket, but I did like having the double thickness for extra thermal protection.

The tea cozy is secured with an interesting cord system. Instead of using a single cord as a drawstring, it uses two separate cords – one with a loop on the end, and the other with a knot or button. The button and loop go at the spout end, while the remaining ends are apparently intended to tie through some eyelets near the bottom of the handle. The general idea is that you can unbutton the front to access the lid and/or infuser, without having to untie or remove the cozy from the pot.

I couldn’t really figure out quite how the ties were supposed to work in the back. The instructions weren’t very descriptive, and the pattern doesn’t have any photos of the back. It says “thread ends through the lower eyelets under the handle and tie.” I don’t know if “under the handle” means between the handle and the teapot, or if the eyelets should be below the point where the handle comes out of the pot.

My teapot is shaped differently than the ones shown in the pattern, and the handle starts almost at the very bottom of the pot, plus the handle is quite wide. When I was knitting the cozy, I hadn’t really thought much about how the ties worked, and moved the eyelets up a couple of rows so that they wouldn’t be right at the base of the handle, and because I was thinking that the ties would pull the cozy edges together under the handle for more coverage. In retrospect, I think you are supposed to tie the cords below the handle.

At any rate, it works – though I suspect I’ll most often be lazy and just tie the cords in the back at the top of the pot rather than messing around with the eyelets and handle.

As for the yarn, it’s Plymouth Gina, which is apparently Plymouth Yarn’s answer to Noro Kureyon. I bought one skein of it to check it out. I’m don’t think it will win over any true Noro fans, but it was pretty decent. It was more consistent in thickness than Kureyon, and didn’t have all the little flecks of vegetative matter. After blocking, I think it is also just slightly softer than Kureyon. The fabric also feels slightly thinner, despite the yarn having nearly identical yardage for the weight.

I actually like the rustic look and feel of Kureyon, and I think the way the color changes are done in Noro are more complex and interesting. But for people who dislike the veg matter, or the thick/thin quality of the Noro yarns – or who are just looking for a more economical alternative (currently around $6 per skein instead of $9), it seems like a decent option.

More details and photos on my Ravelry project.

This entry was posted in Uncategorized and tagged knitting. Bookmark the permalink.

4 Responses to At Least the Tea is Warm