And That’s When I Ran Out of Pins

Half a dozen from the end of the shawl. Well, I didn’t actually run out completely, just out of the pins in my pin storage box. I still had several unopened packets of T-pins. Thank goodness. 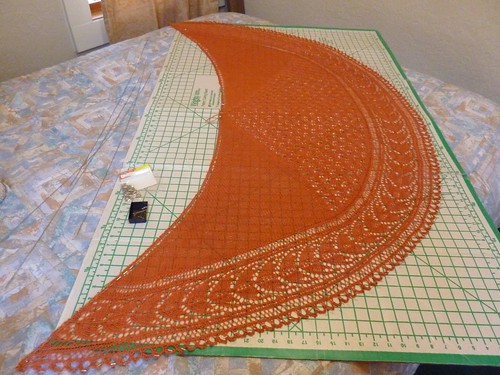 And speaking of the faggoting, I had to drop down the stitches of the inside faggoting section twice because I got my yarnovers in the wrong place. That was not fun. But the first time it was at the center of the shawl, so it was pretty noticeable, and I knew it would keep bugging me. Unfortunately, it was a LOT of rows down from where I was (at least 20). It took a long time to fix. The second time was closer to the end, and only about 8 or 10 rows down.

This entry was posted in Uncategorized and tagged blocking, knitting, shawl. Bookmark the permalink.