Finally I have another finished object for you. 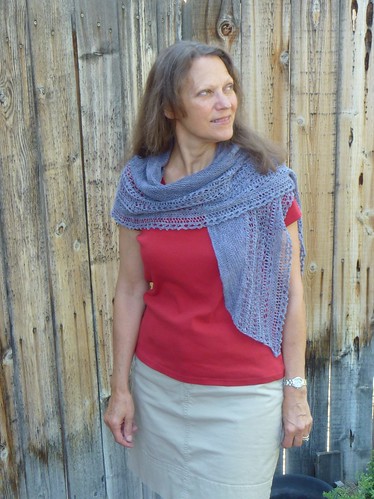 This is Henslowe. Here’s a better look at the pretty edging: 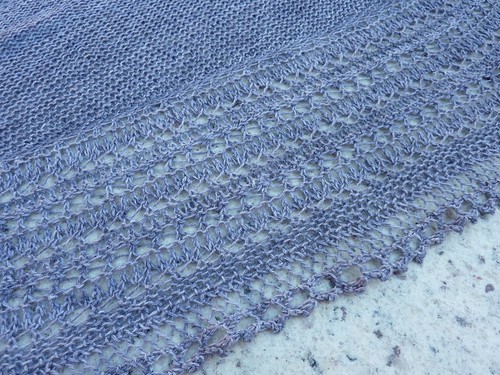 It’s written for a fingering-weight yarn, but I made it with a lace-weight silk/linen blend.

The construction was very interesting. First you knit the garter stitch body by starting at the bottom (point) of the shallow triangle. You knit upwards, leaving YO loops at the ends of each row. Then you bind off across the top edge, and pick up the YO loops along the bottom two sides of the triangle. From there you knit downward, working the roman stripe sections. Finally, you end with a sideways knit-on border that produces the final mesh section (faggoting) and the picot bindoff.

The size as written is really more of a small shawlette/shoulder shawl, or a large scarf. Because of the shape, I think it’s really best suited to that size. If you made it much larger, it would end up extremely long before it really got very deep. Plus, since the top edge is straight rather than curved, it won’t sit around the shoulders as well as some other shapes.

If I wanted to make a large shawl, I think it would be better to work the main body in a different shape, such as a half-circle or less-shallow triangle, and then add on the border. But I think the pattern looks very nice wrapped around the neck as a scarf.

I added more rows to the garter stitch body, and an additional repeat of the Roman Stripe pattern – partly because I was using thinner yarn and needed to compensate for size, but also because I had a lot of yarn. In retrospect, I wish I hadn’t done the extra stripe repeat. It’s fine as is, but I think the pattern’s original size/proportions are better. I considered ripping out the edging and removing the extra repeat, but then decided it wasn’t worth the work. And this way, it’s large enough to cover my shoulders if I need a little extra warmth.

I really do like the edging, and I’d consider knitting the pattern again, either in the original size or in a larger size with a modified shape.

I liked the yarn, and it made a very lightweight piece for wearing in warmer weather.

This entry was posted in Uncategorized and tagged knitting, scarf, shawl. Bookmark the permalink.