The Grass is Greener

But not by much. 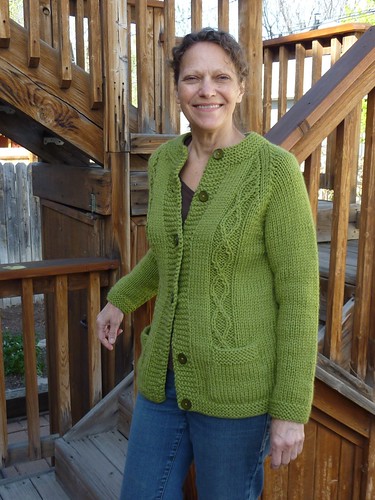 It’s not a color I would normally wear, but I got the yarn for such a great deal, that I couldn’t resist. It’s Patons Classic Wool that I found it at the local Dollar Tree. For a dollar a skein, how could I pass it up?

I considered overdying it, but then decided that it might work well for a vintage (1966) cardigan pattern I had. The pattern called for bulky yarn, but the worsted-weight held double gave exactly the right gauge.

It worked up really fast at that gauge (2 weeks from start to finish), and I like the weight. It’s perfect as a light jacket for cool temperatures.

When I was looking for buttons, there were some green buttons that matched the yarn very well, but were strangely thick. Buttoning the thick fabric over the thick buttons might have been an issue. I was just about to settle for some cheap brown buttons – they looked pretty good with the green, but were a little smaller in diameter than I’d like. But then I saw these. 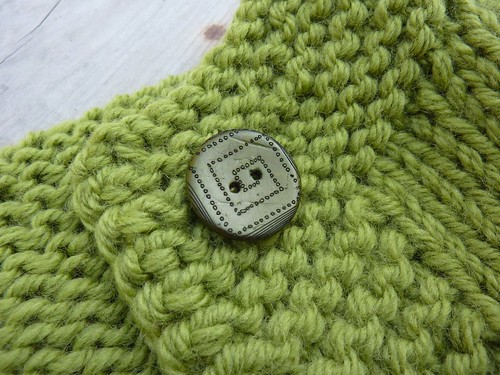 Just the right size, and sort of an olive green that went with the yarn without matching it too closely. They were kind of pricey for buttons, but considering that the yarn cost next to nothing, I figured it was OK to splurge a little on the buttons.

The biggest modification was construction. The pattern called for knitting all of the pieces flat and seaming. With such bulky yarn, I wasn’t too thrilled about the idea of having thick raglan seams at the shoulders. But I didn’t want to knit it top-down, because the upside-down cable stitches would have bothered me. Instead, I knit all of the pieces bottom-up to the armhole, working the armhole bind-offs on each piece. Then I put all of the pieces together and worked the yoke in one piece.

Everything else I changed was pretty minor. I added a couple of stitches to the body of the sweater at the hem for a little more ease at the hips, but decreased them away as I worked up the body, so that I ended up with the same number of stitches at the underarm as called for in the pattern. I also changed the length of the garter stitch sections at hem, cuffs, and neck – some was on purpose, but the bottom hem is short by one garter ridge by accident.

This entry was posted in Uncategorized and tagged cardigan, FO, knitting, sweater. Bookmark the permalink.

11 Responses to The Grass is Greener