I’ve always liked the idea of a Cowichan sweater–big and cozy, in natural colors; but not so much the traditional designs of them, with the big animals or other representational designs in the midsection. I never thought those bands of stripes would be very flattering on me. But after making my Vintage Green sweater, and seeing how much I liked the weight of it, the urge to make one grew stronger.

And so a plan began to form. I liked how the doubled Patons Classic Wool worked out in the Vintage Green sweater, so I knew that would be the yarn. The free Bernat pattern “I’m the Dude” jacket (formerly called “His and Hers Thunderbird Jacket”) was pretty close to what I had in mind, though it was a slightly bulkier gauge. I figured I could make it work by using numbers from the Vintage Green and doing a mash-up of the patterns.

Then began the task of figuring out what kind of patterns I wanted on it. I wasn’t too keen on the geometric patterns most of them have. I spent a lot of time searching the Internet for pattern ideas, and eventually saw one that had a floral motif with vines. That really appealed to me, so I used that as the basic idea.

I spent weeks working on the charts. For the yoke pattern, I took the motif from the vintage sweater and modified it to start from the back center and scroll to the front in a mirrored image. The most challenging part was charting out the raglan seam area so that the pattern would look as uninterrupted as possible. I had to knit a few samples and tweak it before I came up with something I liked.  For the motif at hem and cuffs, I wanted a smaller design, so I just made up a coordinating pattern.

I thought that once it was all charted out, it would be a piece of cake to do the actual knitting. And it was, for the most part. But once it was done, I wasn’t very happy with how tight the yoke was, or how the collar sat. The problem was that my row gauge was a lot different from the Dude pattern, which I’d pretty much followed for the yoke shaping. It just wasn’t tall enough from armhole to shoulder.

I ended up removing the collar and reknitting the yoke. Um, several times. I lost count of how many, exactly. But finally it seemed right. Then since the neckline was longer than it was originally, I had to rip out one point of the collar and add a couple of inches. But it was definitely worth it! The fit was much better, and the collar seam wasn’t exposed.   This was also my first experience putting a zipper in a sweater. I was really anxious about doing that, but it really worked out nicely, and I’m glad I finally made the plunge. It did take a long time to do since I spent lots of time getting it basted in place, and then I hand-sewed it in, but it was worth it.

Trying to figure out how to attach the collar without having a really bulky seam was also a challenge, but I won’t rehash the details here, since they’re on my project page. 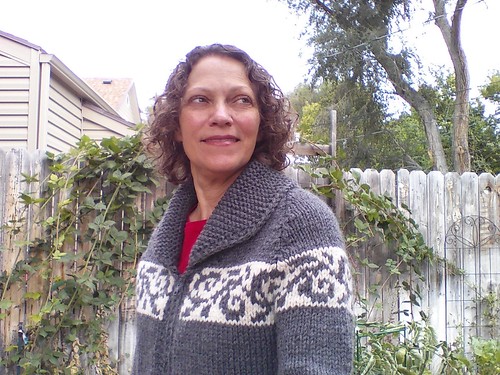 Now I’m ready to lounge around on the couch in my cardigan, like The Dude in his Pendleton.

This entry was posted in Uncategorized and tagged cardigan, FO, knitting, stranded, sweater. Bookmark the permalink.