A couple of years ago, I decided that I really needed to rein in my stash and pare it down. Since then, I’ve tried to knit mostly from my stash. Lately I’ve been choosing a yarn, and then figuring out what I can do with it.

Occasionally there’s a particular pattern I want to make, and have to see if there’s something in my stash to suit it – which worked well for me when I made the “Bird and Vine” mitts, since the Jamieson & Smith I had was perfect for it.

I do occasionally buy yarn, but I’ve been trying not to do that unless there’s a specific pattern I really want to make right away and I don’t have suitable yarn for it. (Then it doesn’t actually go into my stash, so I figure it doesn’t count, right?) I was recently on the verge of buying some Brooklyn Tweed Shelter for a sweater, but decided to hold off – I don’t really have the right pattern in mind for it yet.

Between knitting from my stash and giving away a bunch of yarn that I would probably never use, I’m definitely making headway!

I keep my yarn in large plastic stacking drawer-type bins. I went through the bins the other day to reorganize and consolidate them – managing to go down from 10 bins to 7. Although that doesn’t include the boxes of remnants I have stored in the basement, it does include a lot of worsted- and fingering-weight wool yarns that aren’t really enough to do much with individually – but will be great for stranded knitting projects. Those take up a bin by themselves. So that means it’s really only 6 bins of stash yarn, right? My goal is to get down to 5 (not including leftovers/remnants/samples), and keep it at no more than that.

I have a nice little cubby space that is perfect for 4 bins. (I have no idea what it was originally used for – maybe a TV and/or stereo equipment?) I was sad that it’s about 2″ too short to allow for 6 bins, but it occurred to me that I had a large unused under-bed storage bag that could go on top of it, and should hold a bin’s worth of yarn: 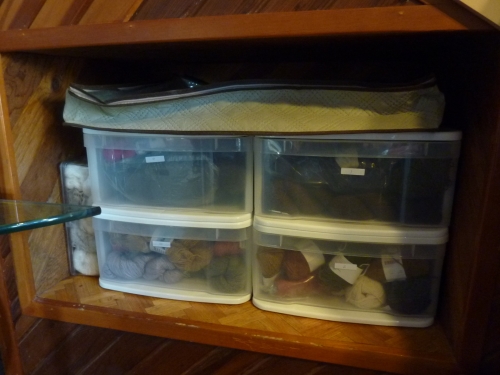 The cubby is off the floor, and gets some light, but no direct sunlight, and it’s in an area that could become a nice craft space. I think this will be much better than the guest room closet that they were in before – less likely to be attractive to any beetles or moths than a dark, undisturbed area. Now my goal is to get my stash down to only what fits in this space, and keep it at no more than that.

While going through the yarn, I ran across a few things that I didn’t know/remember that I had, including this cone of laceweight linen, that’s sort of a silver-gray-green:

I don’t remember buying it at all, when I bought it, or what I had in mind. The only thing I can think of is that I might have wanted to use it for the Holey Square Shawl, which I’m currently making in silk. Oops.

This entry was posted in Uncategorized. Bookmark the permalink.

4 Responses to Stash busting and organizing